I have a parable! 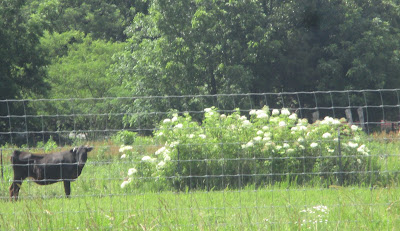 Please allow me to share the background and details of this photo . . .

The cow in the photo is Esther.  She is a full-sized cow and that patch of green with white blossoms spanning about 300 square feet is the elderberry patch here in the Land of Goshen.  When I moved here, there was no elderberry patch, but I knew of 5 wild patches that have sadly disappeared through the years.  In 2012, I realized I was down to one wild patch.  Elderberries are terribly valuable for the immune system and the last wild patch looked to be in the same danger as the others that have disappeared.  Actually, they have died away from spraying by the power company and state roadway mowing.  So, in my last picking, rather than make juice of all of them, I froze a few berries.  I figured freezing would simulate winter and I'd plant them in late winter in the greenhouse.

Only two sprouted, but they grew and when the possibility of frost has passed, I planted those two "sticks" in April of 2013.  The "sticks" were about 18" tall with just a couple of leaves, and what I hoped to be, a healthy root system.  I don't remember any blossoms or berries in 2014, and 2015 was Shemitah, so since I'd planted them, I didn't cultivate or harvest the berries.  By 2016, the two plants had expanded and the harvest was nice. The plants had expanded so dramatically by 2017, I could no longer distinguish the two original plants.  In the past two years, this elderberry patch has provided elderberry syrup, tincture, and juice for several households, as well as producing slips for new patches on other homesteads.

As I viewed this massive expansion this year, Ezekiel 37 came to mind.  There were two sticks that just did what they were created to do.  They grew toward the light and the sun, they drank in the rain from heaven and produced deep roots in good soil.  Of course, they didn't tell each other how to produce fruit, but the bees and butterflies hovered between the two plants in the late spring as the blossoms appeared, doing what they were created to do.  The plants themselves didn't seem to organize a plan for unity, and this has certainly become abundantly more than I had imagined.  I'm even hopeful a bird or two might carry some berries to another location where another wild patch could begin.

It's absolutely amazing what happens when creation simply does what our Creator ordained to be done.  They didn't have meetings, conferences, aim for unity or common ground, those two sticks just did what Father created them to do.  This is not intended to discourage meetings, fellowship, or conferences, but just a reminder that our best intentions are not always divinely inspired.  We cannot make growth or unity happen unless and until it is Father's plan and timing. 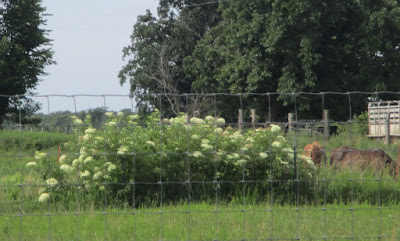 And join them one to another into one stick; and they shall become one in thine hand.
And say unto them, Thus saith Adonai YHUH; Behold, I will take the children of Israel from among the heathen, whither they be gone, and will gather them on every side, and bring them into their own land:  Ezekiel 37: 17, 21